Home » Living in Jena » Before our time 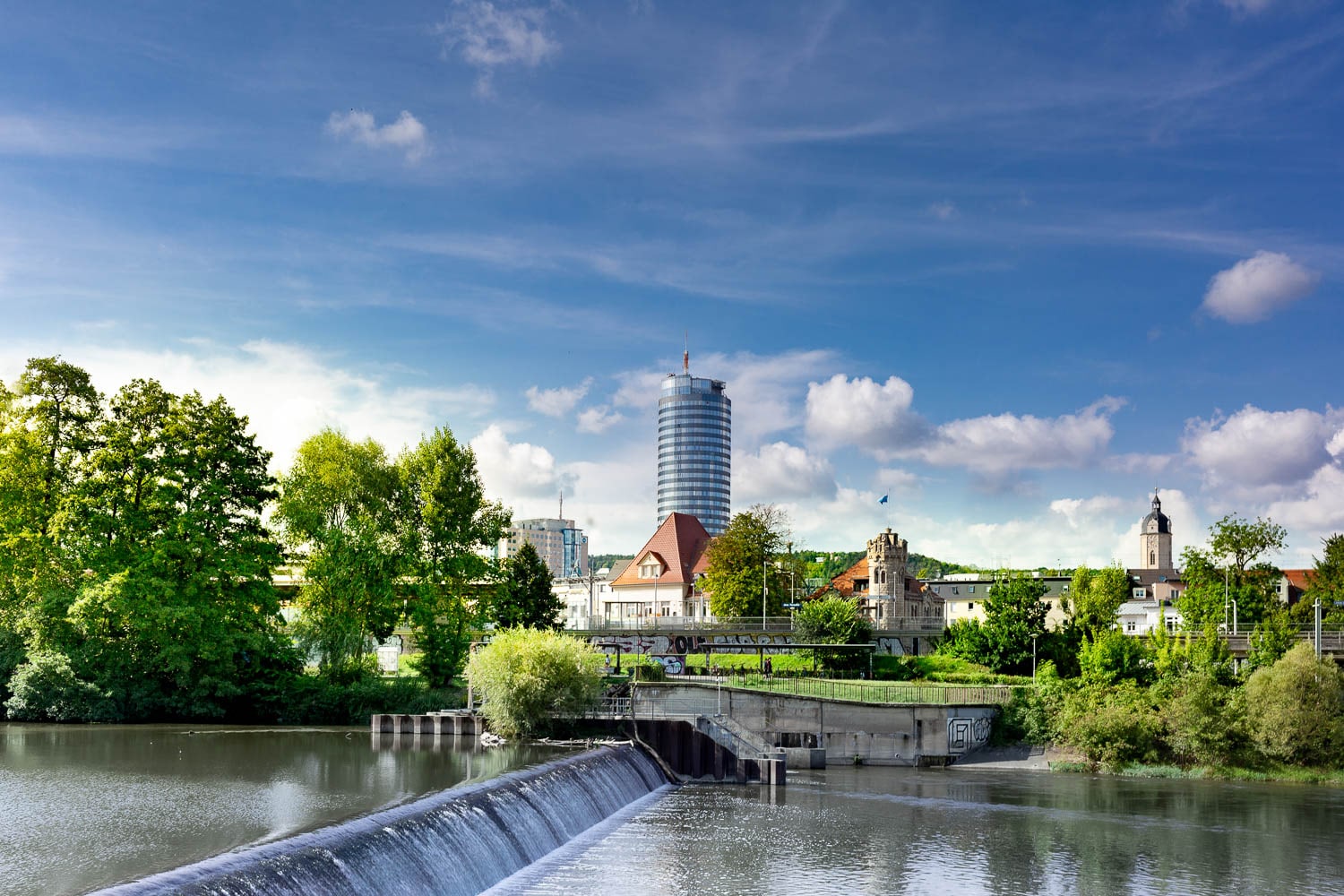 Between the modern, art nouveau and prefabricated buildings

Tall, prefabricated buildings along the A4 motorway: for many, this is the first image they see of Jena. The area was built when it was still part of the GDR, but today it’s a modern, green part of the city and bursting with life. If you drive further into the city from here, the buildings quickly start to look more varied. There’s the medieval town hall, the Damenviertel quarter with its playful art nouveau architecture, the first high-rise building in Germany on the Zeiss former industrial site, there are vestiges of the Bauhaus era like the Philosophenmensa café and modern, functional office, residential and university buildings – in Jena, buildings spanning a wide range of epochs can often be found just a stone’s throw apart. The city is in a constant state of flux: it’s rare to see a photo of it without a crane showing. Along with the Planetarium, the JenTower is probably the most famous building in Jena today. Rising over 144 metres into the sky, this fully glazed circular tower can be found in the city centre and is also affectionately known as the “Keksrolle” or “Swiss roll” by the locals.

To understand why Jena looks so diverse today, we need to look back at its history. This reveals the city’s many historical highpoints, such as the first documentary reference in 1182 to the city as a wine-growing area and the construction of the University and its expansion in the city from 1558. We learn of Jena’s classical heyday at the end of the 18th century, the industrialisation that took place under Abbe, Zeiss and Schott, and the artistic building boom by renowned architects such as the art nouveau designer Henry van de Velde and the master of Bauhaus, Walter Gropius, at the start of the 20th century. Yet Jena’s architectural cityscape has also been heavily shaped by darker events. Events like the city fire around the battle of 1806, or the devastating bombardment endured by the inhabitants at the end of the Second World War, when numerous air attacks destroyed around 15 per cent of the city. Rubble and vacant gaps between buildings became the legacy of the GDR government that followed, which from then on took over the structural rule between the planned and post-war economy. Reunification in 1989 heralded a further construction boom – all holdings were renovated and new business and, especially, shopping opportunities were created in the city. The most famous example: the Goethe Galerie – once a production site for the main ZEISS factory – promoted the industrial facility to a modern temple to shopping featuring an impressive glass and steel structure. 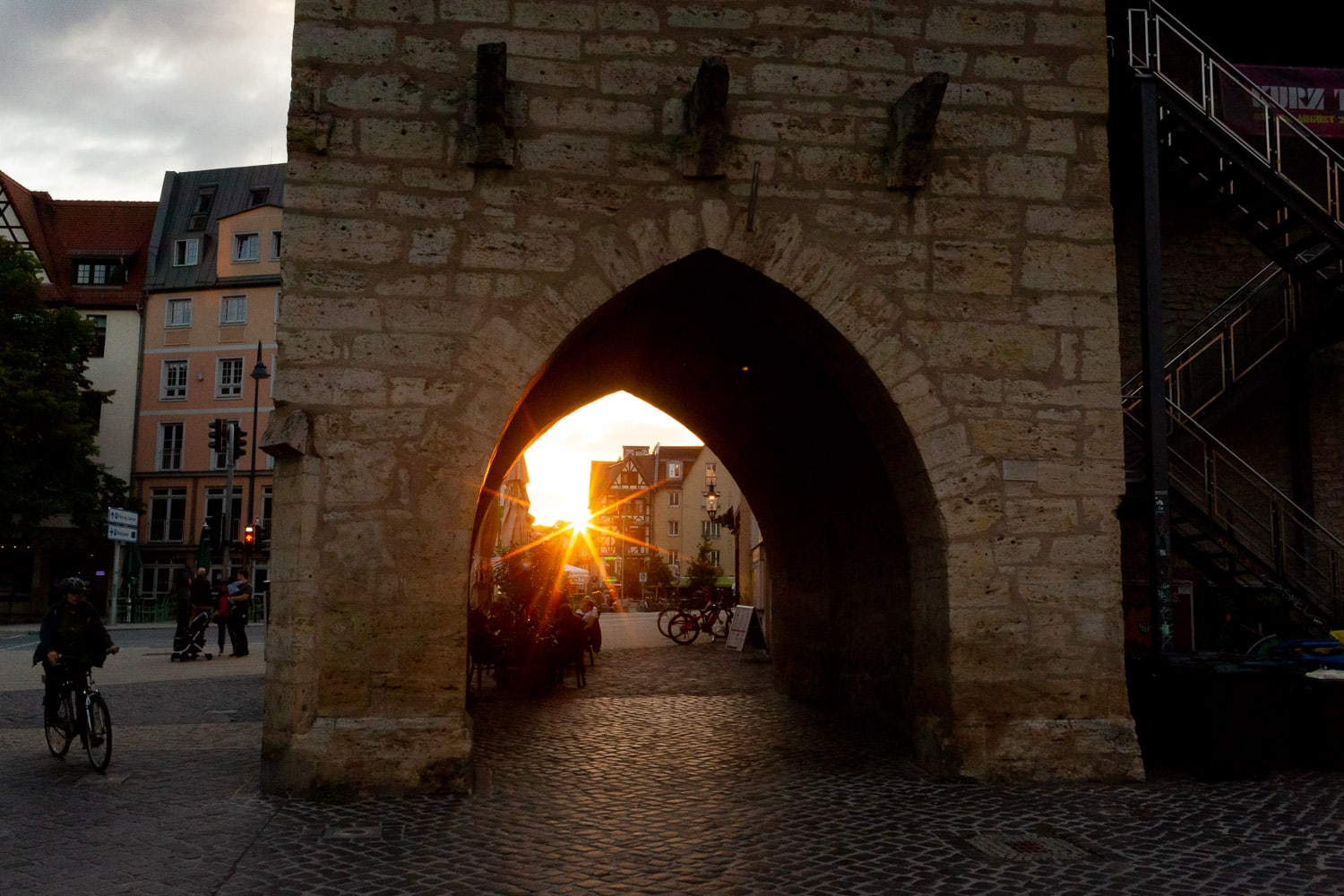 Cast in bronze, he still watches over Jena’s marketplace: Johann Friedrich I., Elector of Saxony – also known as ‘Hanfried’ to the citizens of Jena. Jena has him to thank for its status as a university city in 1548. The fact that all of this was initiated by the Elector’s lost war a year earlier is now part of the long history in which the city and the university have grown inexorably together. This is because the arrival of students and scholars was not envisaged as an important step towards the development of the small town. Ultimately, the University has had a major impact on the cityscape and character of Jena. The “storehouse of knowledge” – as Johann Wolfgang von Goethe once called Jena – is more relevant than ever today. The various university buildings, from the founding Collegium Jenense to the modern teaching facilities and campus areas, are integrated into contemporary city life.